A couple years ago, I moved to Pflugerville, TX with my family. We'd lived in Austin for a couple years but got burned on the last house we bought and decided to rent outside of Austin. As we were moving in, a neighbor came over to help. He was really nice and we'd talked a couple times about what each of us did for a living and for fun. After that we stopped talking as most Americans do; there just isn't a lot of neighbor-ness any more.

A week ago I get an email from someone asking if I can do a robot portrait. They also notice that my email is in Austin and that's cool because they are in Pflugerville. I open the attachment to see that it's my neighbor. He'd apparently been keeping an eye on this little project for some time and had always wanted one for his friend. So I was able to draw it and walk it over to him at which point we spent a long time talking about model making, Make magazine, Lego, sci-fi, fantasy and just general geekiness.

After spring break he said he'd bring his trebuchet to the park down the street and show the kids. The world is small and funny some times. 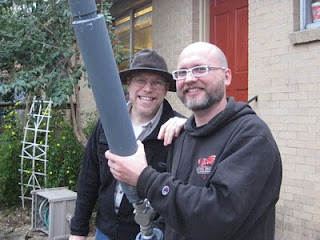 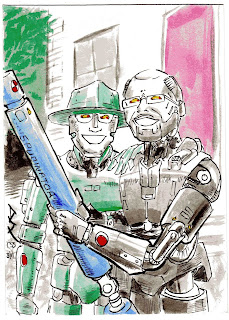 I didn't do a video of this drawing, but instead, here are some videos Jason and his friend Sean made of all their projects. Yes they remind me of Adam Savage and Jamie Hyneman.

http://www.wonderhowto.com/how-to-build-formidable-potato-cannon-267302/
Posted by Unknown at 7:36 AM 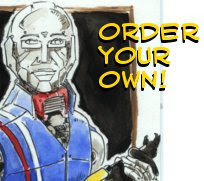 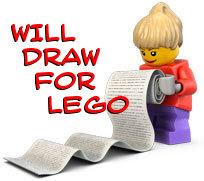 If you'd rather order a Lego set as payment for a drawing, please click ->here.<- Pick something in an appropriate price range. Plus, each order goes toward a smile account, raising funds for my daughter's marching band.

I'm not just about robots, come see all my artwork. I'm also available for commissions.